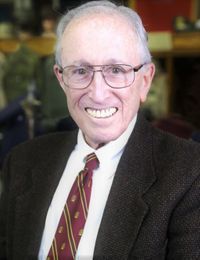 JUDGE WALTER RICE
CHAIRMAN OF THE BOARD

Judge Walter Rice served on the AVHC Board of Trustees as President for many years, before becoming the Chairman of the Board.

Judge Rice was born in Pittsburgh, Pennsylvania. He is a graduate of Northwestern University, receiving a B.A. degree in 1958.

Judge Rice began his law career as an Assistant County Prosecutor for Montgomery County, Ohio, in 1964. He left that position in June, 1966 and became an associate with the law firm of Gallon & Miller.

On June 4, 1980, Judge Rice was sworn in as Judge of the United States District Court for the Southern District of Ohio, at Dayton, having been appointed to that position by President Carter.

Judge Rice served as Chief Judge of the United States District Court for the Southern District of Ohio from October 13, 1996 to October 12, 2003.

Judge Rice was the recipient of the Thomas J. Moyer award for judicial excellence in 2014.

On September 6, 2019, The Walter H. Rice Federal Building and U.S. Courthouse was officially named at a ceremony, with Rice calling the event and the building’s naming “the honor of a lifetime.”